Gerry came to Melbourne from the UK in 1957.

One of his good friends Vic Andrews had migrated to Australia and was in love with the place so Gerry decided to come and join him.

Originally, he settled down in Melbourne and they formed a partnership and called the company 'Crown and Andrews.'

Gerry and Vic were “gadget men” initially and used to demonstrate kitchen gadgets in the likes of Myer and the then John Martins in Adelaide.

He graduated to dabbling in TV advertising selling knives on television.

He married Lyn, the love of his life in 1959 then moved to Sydney in 1965 (his favourite song he sung to her was If you were the only girl in the World).

Vic Andrews didn't want to live in Sydney so that was good news for Audrey New as she was doing a management course at the time and Gerry asked her to work for him in 1973 (she lived over the road!).

Gerry then went back to the UK with his family and left the running of the business in Australia to the very capable Audrey whilst Gerry opened up a UK office.

His first big toy hit was Sketchagraph and this is also where his UK Company was involved.

Sketchagraph was being successfully marketed on TV in South Africa and it was offered to Gerry.

He formed another Company, 'Sketchagraph' and as a consequence promoted the item on TV and the rest is history.

Throughout a number of countries, it managed to sell 8 million units which was unheard of in those days.

Over time he formed four companies, one even sold carpet cleaners!

But his main love was always toys.

His favourite Toy Fair apart from Australia was Nuremberg and you could always catch he and Audrey at a particular coffee shop doing business or after hours in the bar at the Maritim in Nuremberg.

He and Audrey organised an Oom Pah Pah night for all the buyers they knew from around the world.

1977 saw the release of Test Match, a game that is enduring today as it was back then, selling in both the UK, Australia and New Zealand.

In 1984 he developed a board game packaged in a six-pack foam cooler that was a trivia game full of Australian questions, Oz Quiz, and when that was successful, he went on to develop Brit Quiz.

In 1988 he developed the Neighbours board game and that was a smash hit in Australia and the UK where Neighbours was rating well - hundreds of thousands of pieces were sold.

The hits kept coming in the 90s with the Sale of the Century board game which was massive in Australia.

He always had an affiliation with board games and puzzles and developed a strong relationship with the famous Australian photographer Ken Duncan, and went on to sell his puzzles in Australia and overseas.

He was always very generous with his time particularly when it came to children's charities.

He and Audrey were involved in the Toy Association's Wheelchairs for Kids, raising funds with donated goods at many of the charity night functions.

He was involved in a Lions Club school in Bangladesh and when the opportunity came up in 1999 to develop a 'Kids Day' (where a percentage of sales on the day went to a children's charity) he quickly organised a troupe of people to make it happen.

For his charity work he was awarded an AOM on the 14th of June 2004, you rarely saw him in public without him proudly displaying the award on his lapel.

He is (as is Audrey) an Australian Toy Hall of Famer and was inducted in 2007 for his services to the Toy Industry.

He was a singer! He sang in the Messiah for 15 years alternating between the Opera House and Sydney Town Hall.

He was a champion rally driver and earned himself the Title of 'Triple Crown' as he won the Paris to Peking three times as the driver with Matt Bryson his navigator by his side (the last in 2019 at the age of 87)!

He sold his business to his good friend Adi Golad the owner of Goliath games - they had established a relationship many years prior with Crown and Andrews distributing and promoting Goliath games.

Gerry and Lyn loved to entertain and always opened their house to all for Boxing Day, an event that we always looked forward to.

He also loved his golf and was a member of Oatlands and played annually along the South Coast on the way to the annual Metung golfing trip. 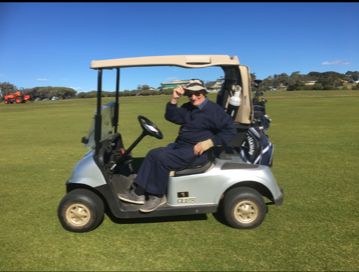 As a raconteur his stories were always very entertaining.

Gerry has achieved in a lifetime what others would have taken three lifetimes to achieve.

Gerry will be missed by all of his mates in the trade both here and overseas, and is survived by his wife Lyn, and daughters Geraldine, Frances and Patricia and his six grandchildren.