Here are the top 10 digital stories from Toy & Hobby Retailer in 2020.

10 and nine were dominated by headlines from the ATA surrounding its toy fair digital show.

Following the announcement that the organisation was holding off until the end of October to make a decision about the 2021 fair, the ATA instead came to the conclusion in early October that the risks posed to attendees and exhibitors at a physical fair were just too great, opting for a fully digital show.

During Melbourne's second lockdown, the ATA announced that it would make a decision around the physical or digital nature of 2021 show by the end of October. At the time, COVID cases were coming down from their all-time highs in early-August, however uncertainty remained around when restrictions would ease and when large events would return. As mentioned above, the organisation came to the conclusion in early-October that it would opt for an all-digital show.

Onto Number 8 - Funtastic to acquire Toys R Us Australia

Following the relaunch of the Toys R Us brand in Australia in 2019, Funtastic announced in October that it would acquire not only the toy eTailer, but its sister site Babies R Us, Hobby Warehouse Group and Mittoni. As reported, the acquisition was successful and the business is now headed up by Louis Mittoni.

Licensing agent Merchantwise was named as the ANZ agent for Zag properties Zag Heroez Miraculous – Tales of Ladybug and Cat Noir and Zag Heroez Power Players in October. Speaking on the partnership, Merchantwise Licensing GM Kerryn McCormack said, "Each property offers a unique and attractive opportunity in both Australia and New Zealand and we are certain they will both enjoy great retail success locally, as they are doing internationally."

The Australian online toy market witnessed a 45% increase in visibility over the past 12 months, Salience Search Marketing reported in July. According to the research, Gamesmen improved its visibility by 52% placing it in the top spot with visibility at 11,669. Toys R Us Australia moved up two positions, going from fourth to second, increasing visibility by 185% to 7,625. Rounding out third place was Mr Toys, which had visibility at 5,271, compared to last year's 3,731 - an improvement of 41%.

Sales of Lego continued strongly through the pandemic as social distancing measures persisted and Lego Masters returned to screens. Lego sales on eBay saw a significant spike during the Lego Masters season two debut, up 92 per cent week on week. The majority of Lego fans went to eBay between 8-9pm where more than three Lego items sold every minute. In the 24 hours following the show, Aussies spent $150,000 on Lego.

Educational Experience's (Edex) parent company Winc announced in February that it would cease to operate the Edex business by the end of May 2020. Winc cited its ongoing transformations as the reason for the closure, helping it to streamline and consolidate its offer in education under one brand – Winc. Edex did not continue as a stand alone business.

Canberra-based independent toy store The Good Toy Shop announced in January that it will permanently close on 14 February. Announcing the decision on its Facebook page, the store said despite its love for customers and products, various factors including digital disruption and rising costs were to blame for the decision to close.

Next is Number 2 - Distributor revealed! This is who has landed Hape

Following a raft of changes - including the appointment of its second-only MD and a brand refresh - U.Games Australia was appointed as the new Australian Hape distributor following Edex's exit from the market. Hape extends the business' reach into the gift, nursery and educational toys market and fits well with U. Games' existing portfolio, MD Andrew McCosker told Toy & Hobby Retailer.

And finally, the most-read digital story on Toy & Hobby Retailer this year is.....

In the wake of the devastating Australian bushfires, plush brand Ty announced in January that 100% of all profits from the original sale of the Beanie Boo Katy Koala was going to be donated to wildlife rescue service WIRES. Australian Ty distributor Big Balloon also donated 100% of profits generated from the sale of Katy Koala. 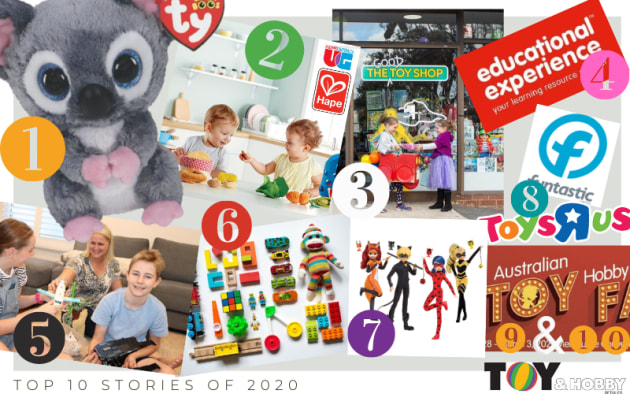