Ugears is experiencing Christmas-like trade during the pandemic. Imogen Bailey discovers how the business’ relationships and structures allow it to deliver during this time.

It was September 2016 when Ugears Australia received its first shipment, two years after parent company, Ugears, began in Ukraine.

Established and owned by John Huckel, the business distributes the some 45 different Ugears mechanical models to bricks-and-mortar retailers throughout Australia.

The niche and unique features of the product were what initially piqued John’s interest to set up the Australian business, he explains.

“I’ve always liked niche market products. I didn’t want to get involved in something that was going to compete with Lego or something along those lines and I saw Ugears as a totally different product.

“I was looking for something else and Ugears hit the mark and it’s certainly grown at a much quicker rate than I thought it would. I think it’s because it is unique in what it has to offer and how it works,” he says.

And, the unplugged, hands-on, tactile construction toy has been a popular choice for families throughout the COVID-19 pandemic too, John explains.

“The business has grown considerably for these past two months it’s been almost like Christmas. We’re focusing on getting the products out as soon as we can and maintaining an open communication with retailers about stock, new models, shipments and point of sale.

“Ukraine has been more locked down than Australia, so there are a lot of people working from home and less staff in the factory, which has resulted in slower than normal delivery times,” he says. 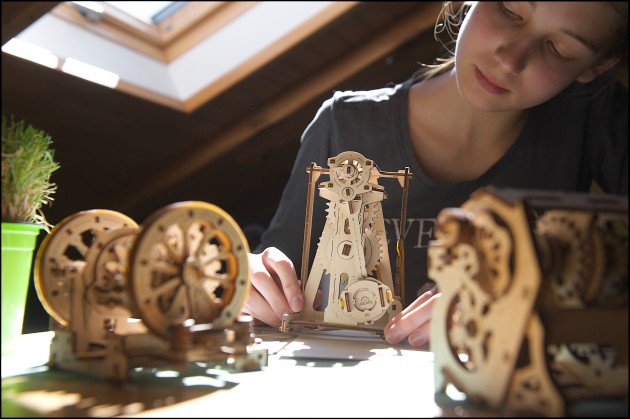 However, the Australian team of four has been able to maintain a high level of service throughout the increased trade because of the systems and structures set up at the start, John explains.

“We set up distribution systems and customer service systems and we really haven’t changed a lot from that structure. However any changes that have been made have been in line with our customers and maintaining their satisfaction.

“I’ve seen different companies work in different ways, so I put in place what I believed was going to work. The basic principles of what we did in the beginning hasn’t changed,” he says.

But this pandemic is not the first time the business has had to rely on its foundations and team members stepping up to deliver. In 2018, a shortage of sustainable plywood – of which the Ugears models are made – in Ukraine had John worried that he wouldn’t have a Christmas.

“As the year went on, I was getting very concerned that I would not have a Christmas because I’d have no stock for my retailers,” John says.

“So, we had to air-freight 15 pallets of stock into Australia. I had all my staff in the warehouse packing orders in November to get it out for my retailers so they could have a Christmas.”

John adds that making the decision to air freight the stock in helped him maintain and solidify the Ugears position as a reliable supplier with retailers.

“The main goal in my business is customer satisfaction, and we do what we can do this, with a focus to achieve never being out of stock.

“Ugears will release approximately 15 new models this year, so maintaining the stock plus buying new stock, putting it in the marketplace and making it work for the retailers is challenging as well,” he says.

However, the business is ready for the challenge, with Ugears also expanding into new categories this year, John says.

“We will be releasing a STEM range of products of which should be available in Australia by the end of July. The demographic will be eight plus and the educational models will teach kids about machines and mechanicalism.

“We with the Ugears Ukriane team are very excited about the future of the Ugears business, and the range of offerings to come,” John says.

This piece originally appeared in the May-June-July edition of Toy & Hobby Retailer.