Other retailing's sales volume was up 2.7% in the December quarter, new data from the Australian Bureau of Statistics indicates.

"The quarterly rise was driven by Victoria (12.8%), as volumes recovered following COVID-19 restrictions from August to October.

"Without the Victorian rise, seasonally adjusted volumes would have fallen in the December quarter 2020," he said.

However, while volumes rose, other recreational goods retailing (which includes toys and games) monthly turnover fell 19.2% in December, following a 18.9% rise in November.

Following significant increases in November due to a combination of eased restrictions in Victoria and the Black Friday shopping weekend, retail sales slipped in December across five of the six industries the ABS monitors.

"New South Wales (-4.9%) also fell as the Northern Beaches cluster impacted spending in the lead-up to Christmas," he said.

Despite the monthly falls, retail turnover in year-on-year terms remains positive, up 9.6% compared to December 2019.

"The ABS December figures are in line with the NRA’s pre-Christmas forecast that the 2020 festive season would be the biggest on record.

"Australian shoppers splurged more than $55 billion in retail sales throughout the second-half of November and all of December.

"From Black Friday and Cyber Monday in November right through to the final days before Christmas and Boxing Day, consumers across the country splashed their cash at the shops.

"We also saw a substantial increase in online spending, with digital sales eclipsing the $5 billion mark across the Christmas period," she said. 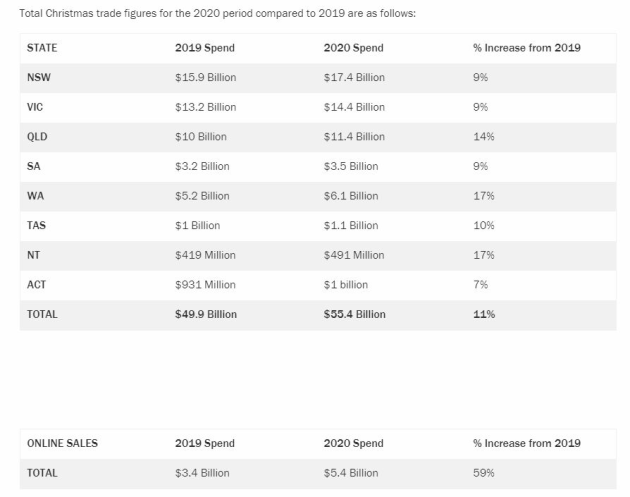