According to new data from Couriers Please, 66 per cent of Australians who have shopped Black Friday and Cyber Monday sales are increasing the volume of their orders each year and 75 per cent say the sales are getting better.

The survey, which was conducted with a nationally representative panel of 1021 Australians who shop online, found that Aussies under 30 partake in the sales more than any other age group – with more than half (58 per cent) purchasing items during this period.

The survey found that younger Aussies are also spending more during the sales, with 72 per cent of those aged 18 to 29 indicating that they have been spending more in the sales in the last two years.

Geographically, the survey found that shoppers in WA (44 per cent) have shopped more than any other state during the Black Friday and Cyber Monday Sales while those in the NT shop the sales the least (17 per cent).

Among those who have shopped during these events, ACT and QLD residents have increased their shopping the most in the last two years (75 per cent and 72 per cent, respectively), compared with 65 per cent of NSW residents.

Couriers Please spokesperson Jessica Ip said that it is expected that the sales will be bigger this year due to the timing of the sales and their proximity to Christmas.

"We expect that Black Friday and Cyber Monday (29 November and 02 December respectively) will attract an even higher volume of sales this year, as the events take place a week later than in 2018.

"As these global shopping events gain more traction locally, with more retailers offering better discounts and products both online and in-store, we expect these sales will grow from strength to strength each year," she said. 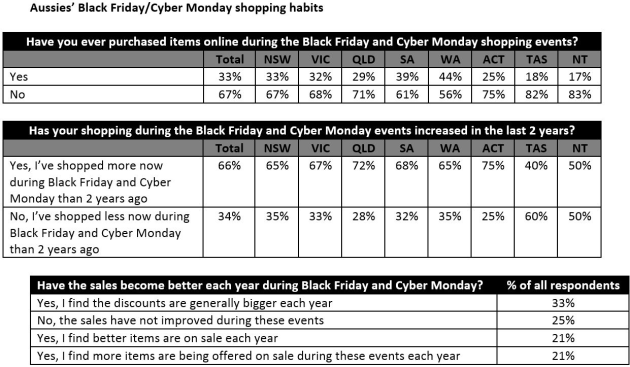