Hobbies and Recreational Goods' online sales accounted for 6.7 per cent of total online purchases in 2018 according to Australia Post's most recent Inside Australian Online Shopping report.

The diverse category includes Games and Toys, Outdoor Goods, Sporting Equipment, Automotive Parts and Gaming and grew 8.5 per cent in 2018.

However compared to 2017, both the share and growth in the category have declined.

Outdoor goods online purchases demonstrated the strongest growth in 2018 growing 17.4 per cent year over year (YOY), followed by Games and Toys which grew 15.5 per cent YOY.

After leading the pack in 2017, Musical instruments and Accessories declined by 5.5 per cent YOY. 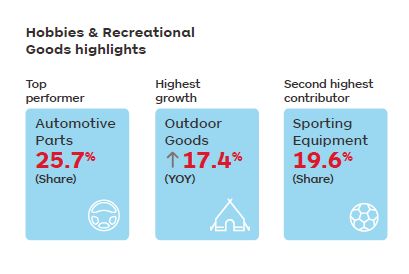 Geographically, over a third of Hobbies and Recreational Goods were delivered to regional areas in Australia which grew 10.1 per cent compared to metro areas which grew 7.8 per cent YOY.

New South Wales, Victoria and Queensland accounted for the majority of online sales for the category, however Tasmania was once again the fastest growing state, increasing 11.9 per cent YOY.

As per the wider retail trends, November and December were the peak purchasing months for the category thanks to online shopping events such as Black Friday and Cyber Monday.

The week before Christmas saw Games and Toys account for 36.1 per cent of purchases in that week, growing over 50 per cent YOY, demonstrating not only the shift to later purchasing behaviours but also the importance of the Games and Toys segment to online sales during that period.

Overall the week before Christmas ranked fifth highest in terms of purchases in the calendar and saw sales increase 25.3 per cent YOY.

End of Financial Year Sales also saw online sales peak for the Outdoor Goods and Games and Toys segments, increasing by 33.7 per cent and 24.2 per cent YOY during the sale respectively. 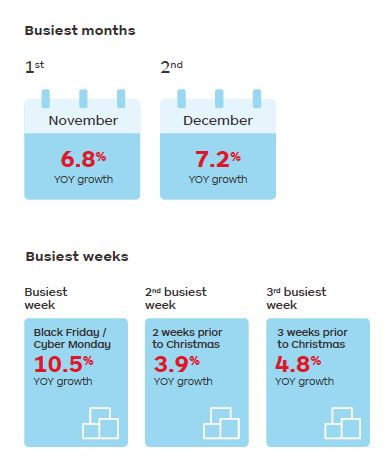 Australia Post GM for parcel and express services/intermediaries Ben Franzi said that the surge in online shopping was largely down to three factors.

"The surge in eCommerce was largely driven by the popularity of sales events, marketplaces and innovative buy now, pay later (BNPL) payment options.

"2018 was the year Australians fully embraced America’s Black Friday/Cyber Monday tradition, and is now the biggest week in our eCommerce history.

"These events have shifted what is usually our peak Christmas shopping period to November, with shoppers now expecting substantial discounts during this time.

"Marketplaces are dominating the eCommerce market, as consumers hunt for the best deals and the convenience of a one-stop-shop.

"The number of marketplace purchases grew by 31.2 per cent year on year, indicating that more sellers are turning to marketplaces to broaden their customer base and grow brand awareness," he said.

According to Australia Post the online spend accounted for 10 per cent of total retail spend in 2018 totalling $27.5 billion, an increase of 24.4 per cent YOY.