The exhibition explores the life and architecture of five of the world’s greatest cities; Dubai, London, New York, Tokyo and Sydney.

Visitors can trace each city’s evolution all the way from 1000AD to today in a fun and educational way.

Speaking on the exhibition, McNaught said that he was thrilled to see it return to Sydney.

"I’m excited to be bringing Brickman Cities back to Sydney and to a fantastic new home at Sydney Tower Eye.

"Sydney is an amazing city and we’ve been blown away by Sydneysiders huge enthusiasm for Lego when we launched our previous creations," he said.

Sydney Tower Eye GM Dave Boyd added that there will be additional features to experience at the exhibition.

"As one of Sydney’s most celebrated landmarks, we are excited to host The Brickman’s exhibition of painstakingly created Lego models depicting famous structures from all over the world and are proud to be able to showcase eight models that have never been seen in Sydney.

"We can’t wait to take the bricktastic experience to another level with the addition of Lego 4D Movies, meet and greets with Emmet, and a ‘make and take’ zone where kids can build their own models," he said.

Meanwhile, in Melbourne, another Brickman exhibition will be held at the Melbourne Convention and Exhibition Centre.

The world-first exhibition transforms Jurassic World into an immersive must-do adventure that will be the largest Lego experience in Australian history.

Over 50 large-scale dinosaurs, props, scenes and activities made from over six million Lego bricks will leave explorers
in awe as they embark on a thrilling journey through stories and characters from the Jurassic World franchise.

"This experience brings two of the most iconic and well recognised brands together – Lego and Jurassic World," McNaught said.

"It will be an epic adventure that I’m excited to share with Victorians, just in time for the school holidays and before we
tour the rest of the country.

"The team and I have worked on this for the last two years, with these being some of the most complex and challenging
models we have ever made.

"They’ve demanded new techniques, thousands of hours building and experimenting to create designs that we’re incredibly proud of and are a true representation of the Jurassic World franchise," he said.

Both events will be run in a COVID-safe manner, adhering to all government guidelines. 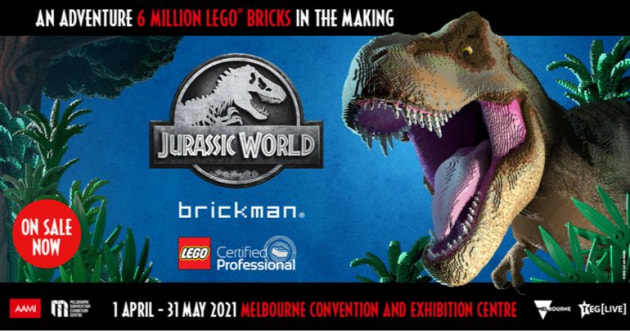