This piece originally appeared in the August-September-October edition of Toy & Hobby Retailer. Subscribe to the magazine here.

An area ripe for licensing, competitive video gaming is a flourishing and lucrative global business but Australia needs to do more to increase its presence in the eSports arena. Kate Murray reports.

In May 2018, Qudos Bank Arena in Sydney, the largest indoor arena in Australia, was a sell-out.

The venue has hosted performers including Beyonce, Madonna, Taylor Swift and Stevie Wonder, but on this occasion more than 18,000 seats were filled by enthusiasts eager to see some of the world’s best professional video gamers doing battle.

For three days, spectators watched intently as teams from as far afield as Brazil, the US and China competed at the Intel Extreme Masters.

The event centred on the computer game, Counterstrike: Global Offensive (CS:GO), and every strategic move was monitored as the teams fought for superiority on the streets of a virtual Moroccan village.

Welcome to the world of eSports – the billion-dollar industry of competitive video gaming.

The size of the crowd in Sydney, and the deep level of interest from players and spectators, are regularly repeated at venues across the globe.

But in Australia, a nation that prides itself on sporting prowess, eSports athletes struggle to compete on an international level.

Some relocate overseas where their video gaming talents are better supported, financed and broadcast, and where there is better internet connectivity to foster training.

University of Melbourne researchers studying eSports spectatorship in Australia say we need to step up investment in this rapidly growing industry to remain a leading sporting nation.

The world’s best eSports players boast career earnings upwards of US$3 million, with prize money rivalling that of the Superbowl; one tournament offered over US$20 million last year.

Having grown exponentially over the last 10 years, analysts estimate the eSports industry will be worth more than US$1.4 billion by 2020.

But Australia is slow to recognise the financial potential and is also not providing the level of network infrastructure the industry demands.

“In Australia, corporations haven’t really recognised there’s an international eSports industry, so they’re not doing anything to compete with or catch up to the international scene at the moment,” University of Melbourne’s Networked Society Institute Research Fellow, Dr Robbie Fordyce says.

“eSports is very contingent on reliable network infrastructure. It doesn’t require a huge amount of data throughput, but it does require lower ping rates.

“So the internet infrastructure needs to be reliable and capable of transmitting information at high speeds rather than large volumes.”

“Traditionally, this distance has also deterred large international eSports organisations from entering the Australian eSports market, leading to fewer local tournaments and opportunities for Australian fans and competitors to engage and train. Fortunately, we’re starting to see progress, but there’s still a way to go.” 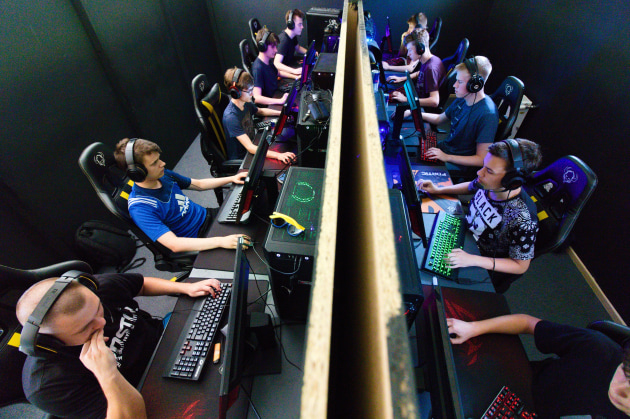 The eSports audience is intertwined with broader video game culture.

Considering 68 per cent of Australians play videogames in an industry estimated at over AU$2.43 billion, this means enormous potential for eSports to grow in Australia.

“They want to see someone who plays very artfully, like watching a fantastic soccer player.”

This is the ‘player’ – one of three categories of eSports spectator identified by the researchers and outlined in their latest research publication.

The team also identified ‘fans’, who are similar to a traditional sports fan because they follow a specific team, and ‘recruits’, who are usually gamers but don’t play the same games used in eSports tournaments and mostly watch notable tournaments, like world championships.

But watching eSports is a more interactive experience than traditional sports viewing and there are some points of difference.

“It’s a spectacle, it’s watching people compete but in a different way,” Dr Gibbs says. “At a traditional sports event you can see the entire field of play, but in eSports you are often limited to the players’ points-of view. It can be difficult to get an overall view of the game.

“This makes it necessary for an eSports game to be curated, to have verbal commentators and live video editing. Meanwhile, other spectators can be commenting and discussing the action in chat channels. It’s a different form of engagement from the audience,” Dr Gibbs says.

The research report on eSports spectatorship in Australia reveals an audience that is international, young, and engaged. They are also keen to see the eSports industry within Australia grow.

“We found many people were going to the big eSports events mainly to support the eSports industry in Australia. We even met people who flew from Perth to Melbourne just to attend because they thought it really important,” Dr Gibbs says.

“For some people it’s an important part of their identity as a gamer and participating in gamer culture by engaging and understanding various eSports that are popular or being widely played even if they do not play the game themselves.”

TIME TO LEVEL UP OUR GAME

“We’re seeing what is often dubbed as ‘sportification.’

Australians are already involved with eSports as viewers, fans and competitors but if we want to join the big leagues, greater investment is needed.

“Faster, more reliable internet will allow our eSports players to become elite athletes without having to relocate. Amateur leagues around the nation could be set up that feed into international competition,” Dr Fordyce says.

And that change starts at home.

“Stadium events are great, but the vast amount of eSports spectating occurs at home on computers and other portable devices,” Dr Gibbs adds.

“It’s time to improve their connection.”

This article was first published on Pursuit in September 2018. Read the original article: pursuit.unimelb.edu.au/articles/how-do-we-grow-australia-s-esports-industry.